2015 has been a bumper season for awards at Meade Potato Company.  In addition to nominations for Best Fruit and Vegetable Supplier and Best Health & Safety at the Agribusiness Awards in December, our focus on sustainability has been acknowledged with three nominations in that category: the hotly-contested Bord Bia Food & Drink Sustainability Award, the Agribusiness Awards Sustainability Award and the Meath Business Awards Environmental Responsibility Award.  We were delighted to win the latter award, and were taken by surprise when our name was announced again to win the Meath Business of the Year.  In a county so rich with enterprising businesses, this is a real honour, and one that belongs to the team behind us here at MPC.  A big thanks to all our employees and fellow growers for the part they have played in making this possible!

Accepting the award, our Business Operations Manager Eleanor Meade paid tribute to the team of employees and growers behind Meades and acknowledged the difficulties facing the potato industry with decreased levels of potato consumption.  “We are thrilled to get this award and to see potatoes get some accolades tonight.  As part of an industry-wide joint Bord Bia – UK Potato Council campaign to inform the public about the great health benefits of potatoes and to get more people eating spuds again. we hope this award might be a good omen!” 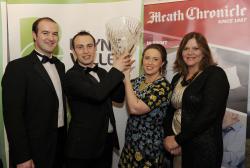 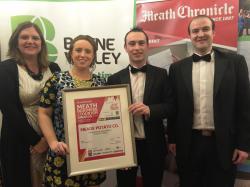