Local students celebrated National Potato Day on Friday 2nd October at Meade Potato Company by getting a spud-ucational tour which included a talk by Ireland and Leinster rugby player Mike McCarthy on why potatoes are an important part of a healthy diet.  They witnessed the journey of a spud from field to fork and learned why potatoes are so vital not only to Ireland’s agriculture, but to the Irish diet.  A three year potato promotion sponsored by the EU, Bord Bia, the UK Potato Council, the IFA, potato growers and merchants kicked off this weekend which hopes to help the humble spud gain ground against rice and pasta as Ireland’s favourite healthy carbohydrate.

On a foggy morning as the potato were being harvested, fifth and sixth class students from Newtown N.S. and Heronstown N.S. in Lobinstown were greeted at Meade Potato Company’s farm by McCarthy who explained to them how important the spud is in his pre-match diet, as well as his post-match recovery.  With a Leinster game the next day against Newport Dragons, he was preparing to consume the easily-digested potatoes in order to fuel up,  “Our Leinster nutritionist manages our diet very carefully so that we perform to the maximum of our potential, and one of the foods he recommends is potatoes.  They are a brilliant carbohydrate, and luckily for me, I love my spuds!”

The students then got to witness potatoes being harvested in the field and follow the harvested spuds from the field into the potato production facility where they are washed, graded and packed.  With over 500 growers of potatoes in Ireland and 9100 hectacres of potatoes planted, it is important to encourage not only the consumption of potatoes, but an understanding of the vital role potatoes play in Irish agriculture.

After the tour, students were then invited to do some taste tests to pick their favourite variety of potato and given a wide array of potato dishes to demonstrate the versatility of the potato in cooking.  “Long gone are the days when potatoes are only eaten on the side with meat and veg,” explained Philip Meade Jr of Meade Potato Co., “Potatoes are being used in all sorts of dishes from Indian curries to Jamaican recipes, and they are a healthier option than rice or pasta after all, according to recent research.”

National Potato Day may be over, but potato growers like Meade Potato Company hope that not only the students who visited them, but consumers nationwide will get a good spuducation over the next two years that will help the potato reclaim its rightful place in the Irish diet. 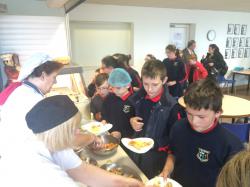 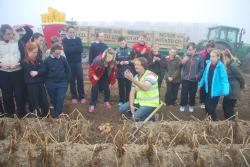